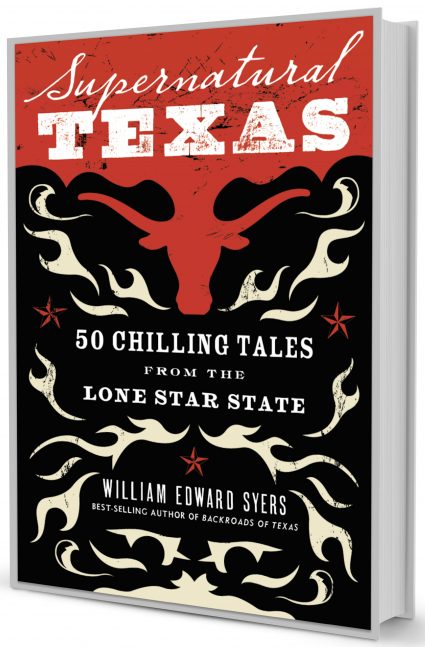 Come explore the shadow world of supernatural Texas with William Edward Syers, one of the Southwest’s premier storytellers, whose collection of the Lone Star State’s fifty most intriguing tales consumed two full years of on-the-ground research.

Come encounter the “The Headless Horseman,” “The Phantom on the Mountain,” and “The Hounds of Orozimbo.” Explore “Terror’s Lake,” the haunted “McDow Hole,” and “Ghosty Branch.” Venture within “The Gate” or “The Crypts of Old Waverly” or, for that matter, any of the other chilling tales.

Supernatural Texas was the first statewide exploration of dimensions beyond normal comprehension. Its content ranges from centuries-old legends to the here-and-now. You’ll confront such beings as the doppelganger, the non-dead apparition, thought transference, and almost every form and shade of phantom.

You’ll encounter specters whose motivations vary as widely as those of everyday folk—to save or warn, to disclose, to prove or disprove something long past, to do penance. And, of course, to seek vengeance!

These last are the things to avoid . . . except, of course, within the covers of this book.

Perhaps. But you won’t forget them.

This unique and riveting collection of the Lone Star State’s fifty most intriguing and chilling tales consumed two full years of research by the author, who travelled more than 100,000 miles in his pop-up camper van, covering virtually every road in Texas while exploring the shadow world of supernatural Texas.

To William Edward Syers, the supernatural was an inherent part of Texan heritage. “You cannot separate culture from deep-seated, unspoken beliefs, “ he would declare. “We are many cultures, each with a particular folklore. The supernatural is part of that.”

Copies of the book are currently in stock at the following Texas retailers and bookstores:

William Edward “Ed” Syers (1914-1987), a Native Texan who lived in Austin and Kerrville, was the author of seven books devoted to Texas. Critics have called him “a walking encyclopedia of Texas heritage.” His long-running feature column about the state’s history and lore, Off The Beaten Trail, appeared in most major Texas newspapers during the sixties and seventies, and was compiled into a best-selling book edition. While Off The Beaten Trail was acclaimed as “perhaps the most diverse and authentic collection of Texana ever assembled,” his best-selling state guide, Backroads of Texas, now in its fourth edition, was cited for its “awesome knowledge of Texas in a style reserved to novelists.” His historical novel, The Devil Gun, was called one of the most powerful novels to come from the American West.